Most people know what the word ‘species’ means when referring to animals but not everyone knows the rules involved in this categorization, they are as follows: If two animals can interbreed to produce fertile offspring (can have its own kids) then those two animals belong to the same species.

But if they can interbreed and have a kid but that kid can’t have its own kids – then they are different species.

For example, a donkey and horse can interbreed to produce a mule, but the mule is infertile (partly due to them having an incompatible number of chromosomes). This means that donkeys and horses are regarded as separate species.

Mules are more patient, hardy and long-lived than horses, and are less obstinate and more intelligent than donkeys which is why they have been utilised by humans so extensively.

Humans being humans have tried a whole bunch of weird combo animals such as the Zonkey (below) or the leapon (featured at top of article). 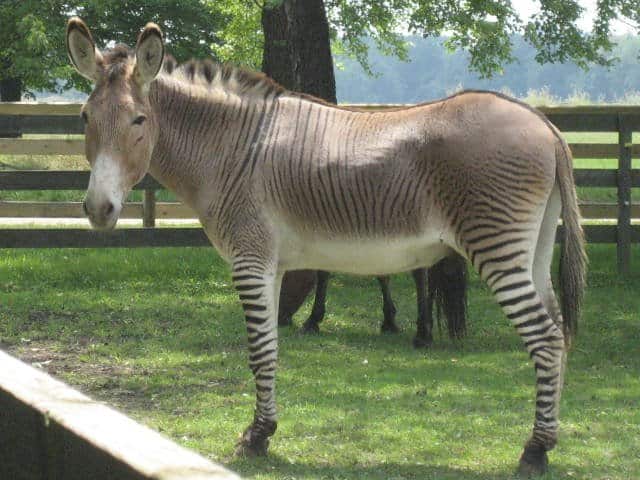 The zonkey, also known as a zebroid

But it gets more interesting than that – Ligers grow to be gigantic, and Tigons are very small in comparison (as big cats go). All animals have specific genes called growth limitation genes that kick in after puberty (kinda like an aversion to one direction) that stop us from getting too big. In tigers these genes are carried by the male, and in lions, they are carried by the female – this means that the specific gender combo of ligers means that they have no growth limitation genes and continue growing until they die. This might sound great but their organs get all fucked up as they become too big for their skeleton and they struggle with a plethora of health afflictions and would never be able to survive in the wild (lions and tigers habitats used to overlap before humans came along and shrunk their respective distributions considerably).

The opposite is true for Tigons, they have two sets of growth limitation genes so that means that they stop growing when they are very young, also their legs seem to be unusually long compared to the rest of their body.

It is quite funny though because you might be intimidated by the enormous size of a liger, but they are actually have super mellow temperament.

Tigons on the other hand are apparently highly strung super aggressive mental bastards.

In case you are wondering what Buckfast is click here.

I hoping that this information I have provided with today will have some relevance and benefit to your existence but I accept that this is unlikely.

As humans we often marvel at the natural abilities of... END_OF_DOCUMENT_TOKEN_TO_BE_REPLACED

As part of my job I deliver presentations to a... END_OF_DOCUMENT_TOKEN_TO_BE_REPLACED

In march 2014 the British press and marine conversation societies... END_OF_DOCUMENT_TOKEN_TO_BE_REPLACED