So we just had an election here in the UK and its just been the 70th anniversary of VE day (end of WW2) so I figured I’d try and be really clever and write something topical even if it is slightly late.

In the lead up to the UK general election one of the most hotly contested discussion points was the renewal of Trident- the UKs submarine nuclear weapon system.

On the one hand you have people putting forward the anti-nuke argument that lots of countries like Spain,Norway and Italy don’t have nukes and seem to manage fine and that the world is not made any safer by having weapons that are designed to incinerate mankind in it. Also at £100 billion it aint cheap and we cant really afford it.

On the other hand the pro-nuke argument is that the post WW2 global political stability the western world lives in is only possible because the existence of nukes makes conventional war impossible.

It is worth noting that the famously mild mannered Vladimir Putin paraded his nukes about in front of the world last week in a WW2 style military ritual so it might be a good idea for us to keep ours. Ukraine disbanded its nuclear capability and found itself becoming Russia.

Regardless of weather you are anti or pro nuke we can all agree on one thing: nuclear weapons are the very definition of overkill, the great arms race of the early 1940s has produced a weapon that is way more powerful that it needs to be .Just like this banana coloured character below. Before you accuse me of a radical change of subject this tiny frog is  representative of natures version of our nuclear arms race.

It is called the golden poison frog or the more ominous sounding  phyllobates terribilis in Latin and it is widely considered to be the most poisonous animal in existence. It is the original poison dart frog– although the tribe that used to use the poison to soak their darts changed to guns because they are safer to operate. Even after three years since a dart has been dipped in the poison it can still kill a fully grown jaguar.

These frogs are not venomous, but poisonous; venomous animals use their toxins to kill their prey e.g. snakes and spiders. Like all dart frogs terribilis uses the poison only  for a self-defence and not as a mechanism for killing prey.

What is interesting is that to produce the poison they have to eat specific species of beetles,ants and mites to obtain the chemical raw materials to produce the poison. It is the fastest acting neurotoxin in the world and works by shutting down your sodium receptors resulting in paralysis and death by suffocation (you would remain concious through this short process).

They are only an inch and a half long but one of these frogs produces enough toxin to kill two fully grown bull elephants (combined weight of 15,000 KG)  in three minutes flat.

As I am sure you know- elephants don’t eat frogs, so why have they evolved such a stupidly potent and powerful poison?

Well is because they got caught up in an arms race with these snakes that has lasted missions of years. 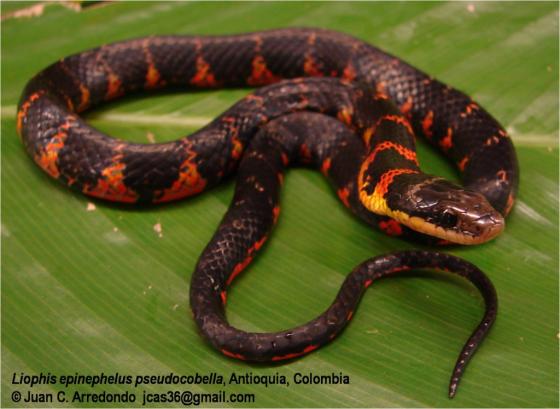 This aptly named fire belly snake has evolved a resistance to the toxic compounds in the frogs poison- enabling it to eat the frog and survive, because it is the only animal equipped with this toxic resistance it essentially enables it to enter its own ecological niche. However as a result of this selective pressure the frogs evolved to become more and more toxic to try to surpass the snakes poison resistance and in turn the snake evolves to become more and more resistant to the frogs toxins.

And after millions of years of the snakes and the frogs trying to best each other we end up with a frog that is toxic as fuck.

The similarities to our nuclear arms race here is obvious- modern nuclear weapons are way more powerful than they need to be, just like poison arrow frogs. Nature has had its own nuclear arms race, although it is unlikely that frogs  will trigger an apocalypse.

If all the shit does hit the fan and we have a nuclear war then you can at least find some solace in the fact that although humans and many other animals will be obliterated to extinction, tardigrades wouldn’t even notice.

More on these guys next month.

As humans we often marvel at the natural abilities of... END_OF_DOCUMENT_TOKEN_TO_BE_REPLACED

As part of my job I deliver presentations to a... END_OF_DOCUMENT_TOKEN_TO_BE_REPLACED

In march 2014 the British press and marine conversation societies... END_OF_DOCUMENT_TOKEN_TO_BE_REPLACED